Romalyn Ante during a poetry reading via Zoom session, courtesy of Balanggiga Press

Our fixation for everything imported, success stories, and more are oftentimes focused on the Filipinos who “made” it in America.

Even in the literary scene, our “it” girls and boys are always Filipino Americans. So where are the Filipinos in other parts of the world? Say, the United Kingdom?

The name Romalyn Ante does not ring a bell. At least if you do not subscribe to The Guardian, a British daily newspaper with an online edition.

In preparation for the forthcoming Anthology of Essays For Filipino Nurses, Balanggiga Press organized an online talk with Ante, a registered nurse, and a celebrated poet in the UK over the weekend.

The zoom session was moderated by Angela Fabunan, (also an award-winning Fil-Am poet) and this writer.

The session was attended by students and prominent authors in the Philippines including Rowena Festin, Allan Derain, Nicollo Vitug, Jehu Laniog, and Maryanne Moll.

Ante is the author of the Antiemetic for Homesickness published by Penguin in 2020, talked about growing up in the Philippines, being a nurse, and getting past  the heavily guarded literary gate in the UK.

Her straightforward answers and bubbly personality charmed us. She was devoid of pretensions.

Anyway, antiemetic is a drug used in treating nausea and vomiting.

Ante grew up in Batangas. A “left-behind” child, her mother, worked as a nurse in Oman and later in the UK.

Her family was just getting by and could not afford books then.

Yet, her literary influence sprung from her grandparents’ storytelling about Philippine mythologies.

In 2006, at 16, Ante and her siblings emigrated to the UK. Like her mother, she took nursing because it would give her a secure job.

Ante prided herself from being a part of the family of shamans, healers, arbularios, midwives, social workers, and nurses.

She is one of the 40,000 nurses at the National Health Services (NHS). They are in the frontlines. To date, the Filipino nurses have also the highest death rate due to Covid-19 according to a report by the Nursing Times in June 2020

Her experiences as a nurse and her family background stood out in some poems from her book like “The Shaman, The Servant” for her grandfather.

In the poem, she placed herself and the grandfather in different positions, different times, and situations but with the same goal- easing the pain and suffering of others.

The grandfather as a shaman uses “langis ahas” while muttering incantations, and she as a nurse, inserting needles on a patient’s arms, mentioning gauze and medicines.

As a child of a migrant worker, and now a migrant, Romalyn knows the pain of losing a country, a part of herself, and her culture.

But she also recognized the pains of her mother and all the migrants in the diaspora who have lost their families, their countries, and their cultures to be able to survive in their host countries.

Despite the longings, Ante is thankful for the opportunities in her second country despite being “ubiquitous yet invisible”.

“If we had a choice we would not leave (the Philippines). But we only had one choice – to leave for security,” Romalyn said. 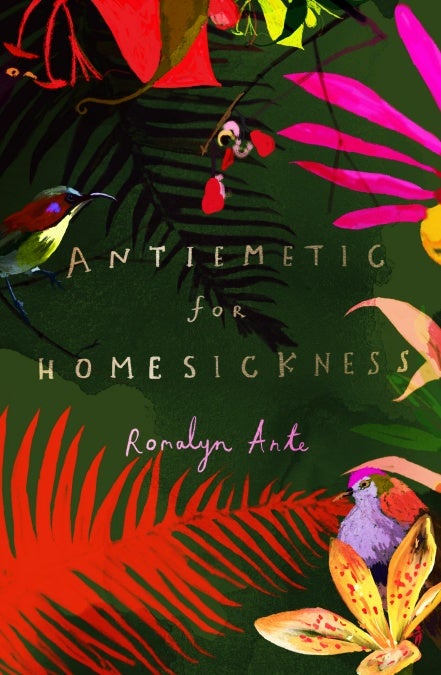 Antiemetic for Homesickness (Photo from Penguin  )

Ante’s interest in literature was always there. In Mabini, Batangas where she studied, she mentioned that she wrote poems in Tagalog and posted some of these in the school’s corridors.

As a nursing student, she chose not to join creative writing class because her money was enough. But the love for reading never hindered her. She used her library card to immerse herself in books.

Soon enough, literature got her hooked. It was like an IV drip that sustained her throughout her nursing career.

She learned about Shakespeare and traditional poets while taking GCSE (General Certificate in Secondary Education), she appreciated it because it provided her knowledge on the meters and rhythm in poetry.

But it was the poetry book Rose by Li-Young Lee, a Chinese American poet that she realized that migrant stories or perspectives can be read by anyone.

It also influenced her to navigate away from the traditional writing in poetry which has meters and rhymes.

“It contributed to gate-keeping if we always focus on the stories of people who are always in the spotlight,” she said.

She is the first East-Asian to win both the Manchester Poetry Prize in 2017 and in 2018 the Poetry London Prize 2018.

Her debut pamphlet, Rice & Rain (VPress), received the 2018 Saboteur Award for Best Poetry Pamphlet. She has been featured in and commissioned by several organizations such as Southbank Center, Book Week Scotland, Harper’s Bazaar, Vogue UK, Birmingham Literature Festival, and Verve Poetry Festival, and ran several poetry workshops including those for The Poetry School, Royal College of Nursing, UniSlam, and Writing West Midlands.

Ante is a Poetry Ambassadors 2021mentor. She is also long-listed for the 2021 Dylan Thomas Prize.

Her book Antiemetic for Homesickness is available at https://www.penguin.co.uk/books/111/1117727/antiemetic-for-homesickness/9781784743000.html and Amazon worldwide.

Don’t miss out on the latest news and information.